The nation’s housing market is on a correction course 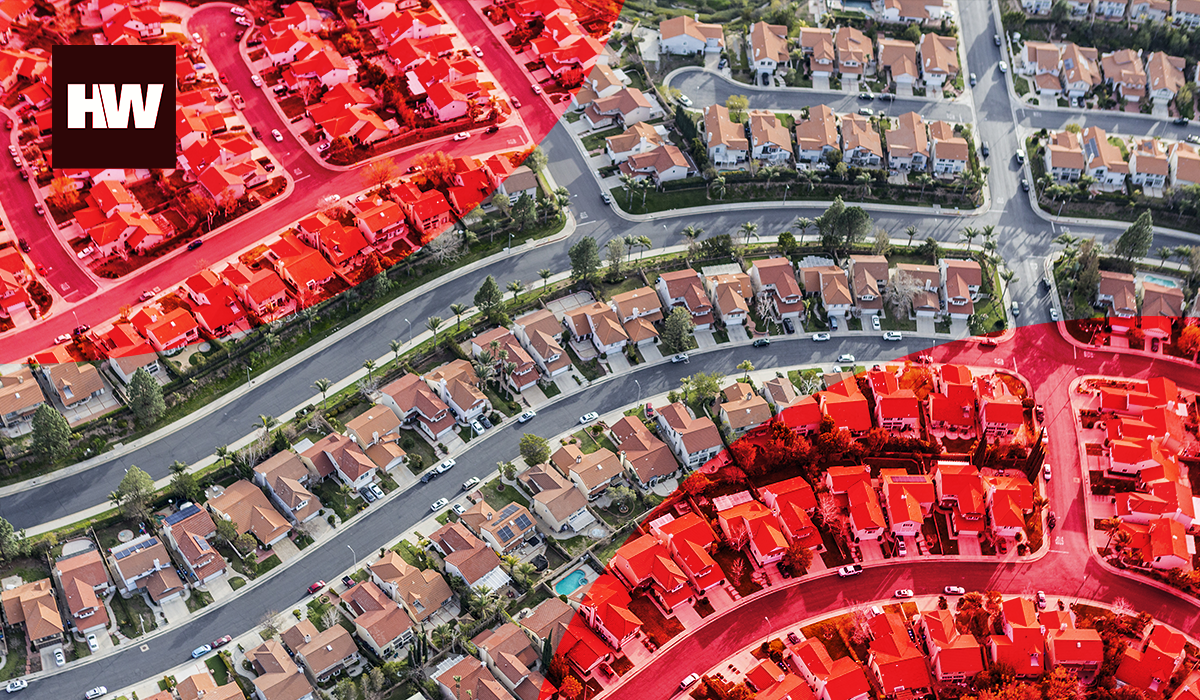 Rising interest rates and a slowing economy overall are already taking some of the air out of the rapid home-price appreciation the housing market has experience over the past year, according to the recently released Federal Reserve Beige Book for July.

Several leading housing-market economists also are projecting the deceleration in home prices will continue in near the future as homebuyer demand ebbs — with one economist even predicting that prices will decline in some particularly hot markets across the nation.

“Housing demand weakened noticeably as growing concerns about affordability contributed to non-seasonal declines in sales, resulting in a slight increase in inventory and more moderate price appreciation,” states the Federal Reserve’s most recently released Beige Book report — based on data and reports current as of mid-July.

The Beige Book reports, published eight times a year, are based on interviews with bank directors, business and community organization leaders, economists, market experts and other sources.

Fannie Mae’s Economic and Strategic Research Group also released a recent report that projects year-over-year growth in home-price appreciation for 2022 will reach 16%. Much of that appreciation is front-loaded, however, with outlook for the months ahead not so bullish. The Fannie Mae report projects “strong deceleration in home-price growth going forward” due to higher mortgage rates and the overall slowing economy affecting purchase demand.

“With inflation running well above the target rate, the market’s expectation that further, substantial monetary tightening is needed has driven interest rates even higher, and interest rate-sensitive sectors, including housing, are slowing in response,” said Fannie Mae Senior Vice President and Chief Economist Doug Duncan. “Homes listed for sale are increasingly seeing asking-price reductions, and both construction and home sales — both existing and new — are slowing.”

Freddie Mac, in a quarterly forecast report issued by its chief economist, Sam Khater, also projects that homebuyer demand will moderate in the months ahead, resulting in a switch from “the hot housing market of the last two year to a more normal pace of activity.”

“Taken together, these factors are exacerbating affordability challenges and causing a slowdown in the housing market.”

Mark Zandi, chief economist for Moody’s Analytics, during a webinar late last week sponsored by mortgage-analytics firm Recursion, also offered a sober outlook for home-price growth. Zandi stresses, however, that despite the headwinds, we are unlikely to see a housing-market meltdown like that experienced during the global financial crisis some 15 years ago.

“We calculate that over 80% of metro areas are meaningfully overvalued,” Zandi said during the Recursion webinar. “… First-time homebuyers are locked out because they just simply can’t afford to buy … and trade-up buyers are locked in [with interest rates well below current market levels].

“So, home sales have really gotten completely hammered,” Zandi said. “Inventories are rising across the country. They’re still low by historical standards, but I suspect that’s going to change pretty quickly, particularly in the most juiced markets.”

Zandi adds that those dynamics, coupled with analysis of other data, suggest strongly that the housing market is going to experience a correction in prices.

“The market is going to go into correction,” he said. “I don’t think, however, it’s going to crash for several reasons.”

The reasons it will avoid a crash, according to Zandi, are that overall housing-inventory levels remain relatively tight by historical measures; mortgages overall have and continue to benefit from solid underwriting and oversight; and we are not seeing the kind of speculation that marked the housing market in the run-up to the 2006/07 crash.

“I don’t think national housing prices will decline in a meaningful way,” Zandi said. “But there will be some price declines across the country.

“The worst price declines [are projected to] be close to double digits — [near] 10% peak to trough — [in places like a] Phoenix, or Tampa. Although in the grand scheme of things, those also are markets where prices were up 30% this past year and 30% the previous year, so you’re only giving back a bit of a bit of what was been gained over the past few years.”

Julia Coronado, president and founder of housing-market research firm MacroPolicy Perspectives, stressed that homebuyers and consumers generally are not as highly leverage in terms of debt, compared to the era of the prior housing-market crash some 15 years ago. That, she explained, will help moderate the impact of any housing-price decline going forward.

Creating a path to success in today’s purchase market

Meeting the needs of a new generation of homebuyers while managing the ebbs and flows of a volatile housing market is a major endeavor for any mortgage lender. So, what should lenders be doing to thrive in the face of a post-pandemic housing market rife with new hurdles?

In fact, Coronado said for some markets that have experience rapid home-price appreciation, a decline in home values may benefit the overall market.

“At least what I’m seeing in a very speculative market here on the ground in Austin is that a rapid pace of price discounting is now taking hold, which I think is great,” said Coronado, who also participated in the Recursion webinar. “We’ve gone up about 50%, one of the highest paces of appreciation over the last two years, and if we [home prices in Austin] went down 30%, it would be fine.

“You’d still have most homeowners up in value overall and meanwhile, it could provide a lot of relief on rent growth, on [housing] affordability and facilitate a move back to lower mortgage rates over time.”

Following are excerpts of statements on housing conditions from each of the 12 Federal Reserve Districts —drawn from the just-released July Federal Reserve Beige Book. The current report is based on information and data collected on or before July 13. The prior Beige Book report was based on information collected on or before May 23..

Boston — First District [Boston] contacts reported that higher mortgage rates had led to somewhat cooler demand for residential real estate, resulting in increased inventories in recent months. …Inventories increased in most markets in recent months, reflecting a softening of demand, but remained down on a year-over-year basis in several markets. The price of single-family homes continued to rise at about the same year-over-year pace as a month earlier.

New York — Housing markets have been mixed since the last report, with the rental market continuing to strengthen but the sales market weakening noticeably. Both in New York City and across the metropolitan region, there has been a steady and pronounced decline in signed contracts in both May and June, going against normal seasonal trends. … A leading local real estate authority attributed this drop-off in sales to a combination of low affordability, rising mortgage rates and increased uncertainty. There has also been a rise in the inventory of available homes — though it is still quite low — but not a reduction in prices thus far.

Philadelphia — On balance, contacts reported that sales traffic and contract signings for new homes fell modestly, more so for high-end houses. One contact noted that customers were waiting for lower rates or lower prices. Brokers noted that existing home sales continued to fall slightly, and that signs had emerged of a cooler market. While overall prices continued to rise on a year-over-year basis, one broker noted a significant number of price reductions in a recent 24-hour period. However, housing affordability remains a challenge, and rents remain high.

Richmond — Respondents indicated that the residential real estate market remained competitive. However, contacts reported there was a shift in market activity to slightly lower sales volumes and a reduction in buyer traffic, which they attributed to higher mortgage rates. Inventories of homes for sale and days on market increased in the last month while growth in listing prices for homes started to soften. Nonetheless, in many markets the shortage of new homes persisted, as did the slowing of new-home completion due to supply chain disruptions. Potential homebuyers were being priced out of the housing market by the interest-rate increases and higher home prices, particularly first-time homebuyers.

Atlanta — Housing demand throughout the district continued to slow as affordability declined. Home prices reached record levels while mortgage rates rose sharply. The combination of these factors led to a sharp drop in affordability throughout the district. Mortgage originations and pending sales fell in most markets compared with year-earlier levels, as more potential buyers were priced out of the market. Still, the number of days on market remained near record lows. Supply chain disruptions and cost inflation moderated somewhat for new homes. However, builders reported greater buyer resistance to price increases and the need to offer incentives, such as covering closing costs, to sell homes.

St. Louis — The residential real estate market has slowed slightly since our previous report due to rising mortgage rates. Total homes sold and pending sales have fallen since our previous report. Inventory has continued to remain scarce, and house prices are at elevated levels relative to income, especially for first-time homebuyers. Multiple contacts reported fewer bids per listing since our previous report, a signal that demand is beginning to cool. Most contacts are expecting real estate demand to slow further in the coming months. The rental market continues to be extremely competitive. Rents … saw strong growth in recent months. Many discouraged would-be homebuyers seem to be turning to rentals to avoid high mortgage rates and home prices.

Dallas — Conditions in the housing market eroded more quickly than anticipated during the reporting period. Sales were off notably from earlier in the year and both online and foot traffic slowed markedly. Cancellations rose in part due to loan-qualification issues. Buyers were hesitant to move forward and were looking for better deals, and builders noted offering incentives again to drive sales. Home prices were largely flat. … Contacts said several new land deals were on pause due to rising uncertainty in the market. Outlooks were negative, and sales and starts expectations were being revised downward.

San Francisco — Residential real estate activity eased over the reporting period. Supply chain disruptions and rising labor and material costs continued to put upward pressure on housing prices. Sharp increases in mortgage rates, combined with high home prices, cooled-down demand for existing and new single-family homes. Many contacts highlighted a decline in the number of offers sellers received. Inventories remained strained by historical standards, despite an increase in the number of houses available for sale in some regions. Homebuilder confidence declined further, and permit issuance weakened in most of the district. One developer in Alaska reported a considerable decline in speculative construction of housing units and a low supply of seasonal housing. Reports mentioned increasing rents and declining availability of multifamily housing units.